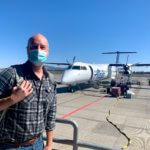 The pandemic has been pretty good to mileage balances with airline plans, especially if you use a loyalty credit card and have still been spending money on Amazon during the pandemic. While it might still be too soon to cash in six figures of points — and many exotic locations are still not available — there are several ways to whet your travel appetite and gently dip your toes … END_OF_DOCUMENT_TOKEN_TO_BE_REPLACED Are you left with a day-long layover at Seattle-Tacoma International Airport (known by locals as Seatac) and not sure what to do? I know the feeling because in my 25 years working for Alaska Airlines, I constantly flew in and out of Seatac, spending many an hour waiting on standby for flights to London, Los Angeles or Lihue -- sometimes the whole day. Plus, I've flown through … END_OF_DOCUMENT_TOKEN_TO_BE_REPLACED It excites me to experience new airlines and types of aircraft. My life in the airline industry kept me pretty geeky that way. Learn more at The Airplane Geek in Me. On my recent trip from Berlin to Riga, Latvia I had the opportunity to experience a new airplane and airline at the same time. I'll review my experience flying airBaltic as well and the fresh new Airbus A220. … END_OF_DOCUMENT_TOKEN_TO_BE_REPLACED American Airlines - effective April 27, 1969 In honor of the 50th anniversary of the Stonewall Inn riots in New York City I thought I'd find a timetable that represents this time in history in aviation. American is a great example, because they were based in NYC until the 1979 switch to Dallas/Ft. Worth airport. This timetable would've been in use for several months, … END_OF_DOCUMENT_TOKEN_TO_BE_REPLACED I'm the nostalgic type, so appreciation for the flight that lit my passion for aviation and travel is important to me. Pacific Southwest Airlines (PSA) timetable effective September 5, 1984 This week's timetable is the one that was active when we took our first family vacation in the winter of 1984. I was 11 and excited for months before the trip. Fog … END_OF_DOCUMENT_TOKEN_TO_BE_REPLACED